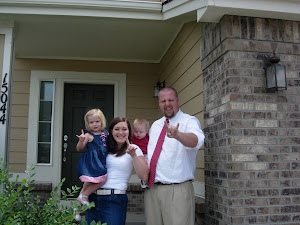 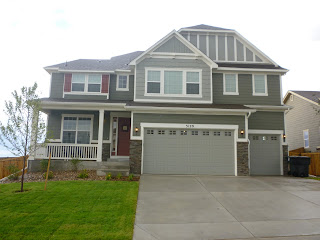 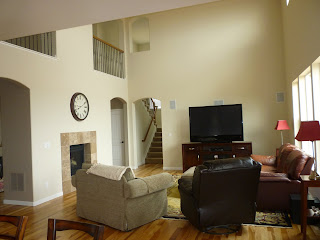 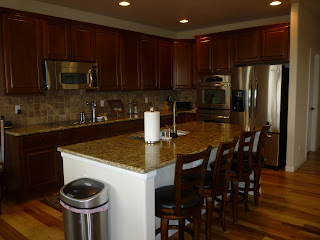 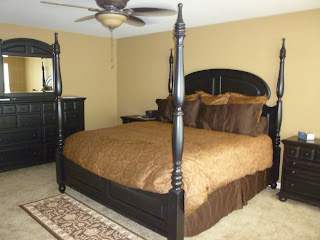 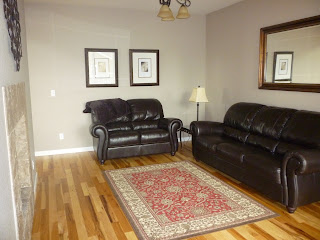 It has been several months since the last blog posting, so many of you will be shocked to know we are alive and well….and just got finished living at my parent’s house for the last 3 months, while building a house, which we just moved into over the weekend. The house is up the street from the kid’s school and down the street from my parent’s home. It is a perfect location, and a beautiful home and floor plan. We loved our last home of 5 ½ years, but were ready for an upgrade and a change. We LOVE our neighborhood and being close to family, so we stayed very close by.
With the end of the school year, we had many fun activities and events. Peyton started T-Ball, coached by Uncle Cory and Grandpa Craig. The team consisted of all his cousins and buddies from church, so it was a lot of fun for all. It was a long season of forcing him to put on the uniform, but he loved being a part of the action – play first base or pitcher were the best spots for him! Peyton started his first day of Kindergarten yesterday. He loves his class and his teacher, Mrs. Frankenfeld. Mya just started 2nd grade with Mrs. Kappan. She is a little book worm, and loves the socializing that school gives her. She frequently wishes we were all born smart, so she would not have to go to school.
We spent the summer out at the lake, the pool, the movies, and even on an adventure or two. We went to the Royal Gorge, which was a beautiful trip and lots of fun with our friends, the Gibsons. We went to Tennessee for the Fourth of July (for a big happy 80th birthday to Steffan’s Grandpa Bud). We also had our first camping trip with with many wonderful friends up to Granby. And to top of the summer, the kids were the flower girl and ring barer for Kristen’s wedding. It has be an adventurous and amazing summer. We are so thankful for the family and friends that share in our experiences and always lend a helping hand! We couldn’t have made it through the move and the summer without them!
Posted by Buschfest at 4:10 PM 7 comments: 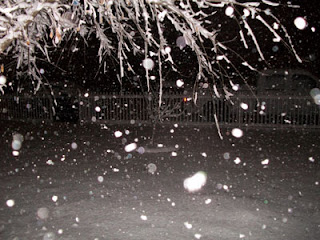 I spoke too soon, we had about 10 inches of snow last night. It was an incredible storm that started as a huge thundershower, then about an hour later the rain turned into these AMAZINGLY huge snowflakes. I was thankful to be at home with the kids enjoying the beauty of it, intead of driving in it like Steffan. I know that spring is a tease here in Colorado, but it is absolutely beautiful. I wouldn't trade it for anywhere in the world! And FYI, the sun is back to shining today! :)
Posted by Buschfest at 10:14 AM 2 comments: 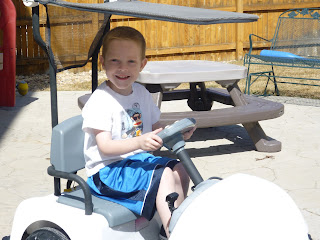 It is Spring Break this week, and the kids are in heaven! No school and lots of SUN so far! Yes, I am working, and Peyton is supposed to be "resting" because he has a cough that we do not want to spread to Emily's twins (yes Emily is already back to work watching Peyton and teaching piano!). But I don't think he has laid down our even watch a minute a TV. He has just been playing away in the backyard. Can you blame him?! I wish I was out there playing too! I am working from home today and trying to get all my meetings and calls in, even though Peyton is never silent, always humming, singing or talking. Even work seems more bearable with this weather! :) Of course it is spring, so it won't last....rain and snow are forecasted for Tues/Wed.

This last year I have been enjoying a new hobby, thanks to a Quilting group with my church (and Chelsie! Thanks!). I have been a long time scrapbooker, and never thought I could sew, but thanks to this incredible group of women/friends, I have learned to sew and create! We worked on this a large project all year, creating one block each month. I still have the border to go, but wanted to share my two creations thus far. And then during a girls scrapbooking trip to the mountains I found a cute valentine's quilt kit, which was so fun to create as well! I promised my friends I would share pictures when I finished, so here are the nearly complete quilts. I just ordered a new pattern and fabric for some table runners, so I will keep everyone posted! 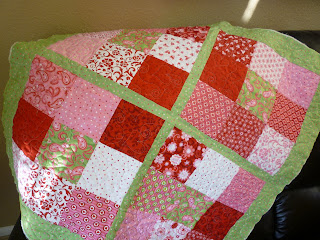 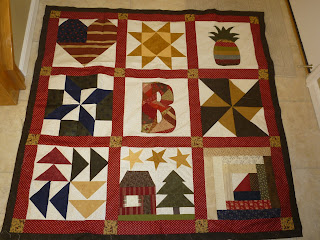 We had an amazing Christmas this year, filled with fun memories and adventures. So, I want to share just a few:
Gingerbread Houses~ 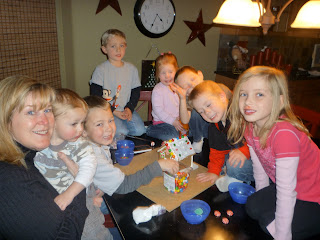 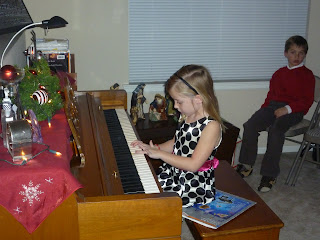 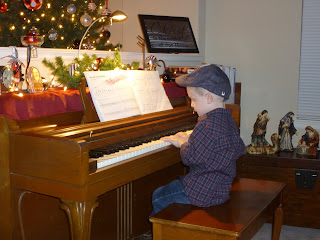 Dinner at the Spaghetti Factory and Downtown Denver Lights~ 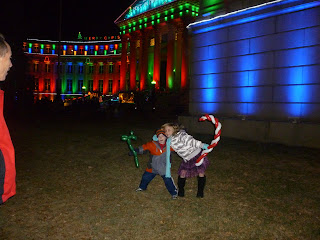 Carolling for friends and family and at the Senior Centers~ 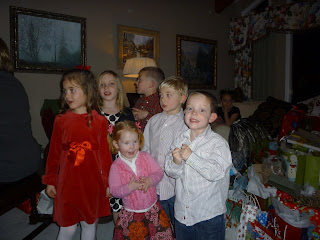 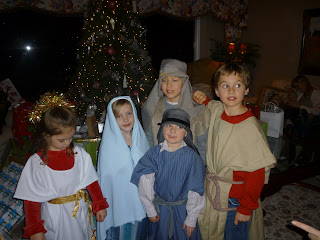 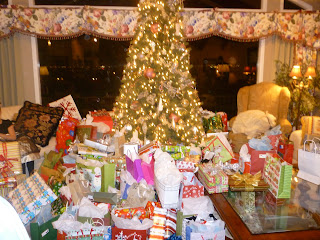 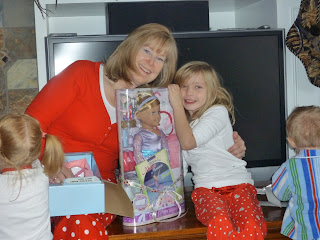 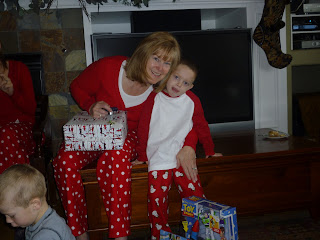 We also had some post Christmas fun, up at the Breckenridge house. Amy took Mya skiing for the first time! Cory and Tiffany also took Jaxon and Max. They did so well! It was awesome! 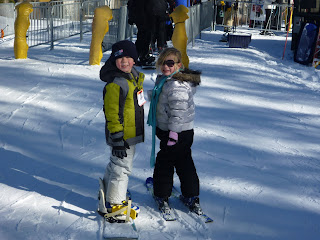 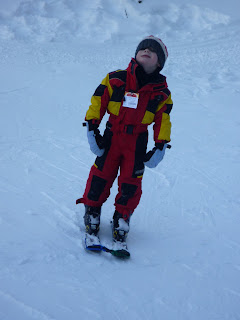 It was so great to receive letters and pictures from all our friends. We hope you all had a very Merry Christmas!!
Posted by Buschfest at 8:20 AM 1 comment:

LETTERS FROM STEVO: Merry Christmas! I guess they could say, we would set this world ablaze!

I have not blogged in awhile because I wanted save everything for the Christmas blog. Consider this your Christmas card in my book. Amy will be sending out Christmas cards but personally, I don't think you're worth the price of a stamp...Our 2009 was full of pomp and circumstance and plenty of bragging for our brag letter. Here is our year in review...full of condescending and arrogant snobbery like you've never seen before:

- Peyton- Peyton went to pre-school, didn't get spanked as much, learned a little about a concept called, "reason" and rode some disney roller coasters completetly expressionless. He is learning how to play the piano and Amy says he is the next Beethoven. He also played soccer for the first time and Amy says he is the next Pele. He is so talented and smart and funny. Total chick magnet...Little Stevo in training. If you tell me different I will crack your kneecaps.

- Mya- Mya completed Kindergarten and took 1st grade by storm. She is making friends and chasing boys. She had a massive sleepover for her birfday followed by a giant lake party. She is sooo popular and she's basically a genius. She is also playing piano. Amy says she is the next Alicia Keys. She is currently in cheerleading and gymnasties...Amy says she is the next Greek goddess of the Olympiad. Take me to the Oracle at Delphi O Greek Goddess!

- El Stevo Diablo- HHMMMM....not much going on here either...

- Amy and Stevo together- We went to the Grand Cayman and set that island ablaze! We swam with the dolphins, made out with stingrays, saved the whales, smote our enemies, found buried treasure and lived it up at the Ritz...We also attended DisneyWorld with the rugrats, with Amy and Tiff as our guides we divided and conqured every square inch of that magic kingdom of plastic!

In summary, we didn't lose our jobs this year, we didn't get excommunicated and we didn't do any serious time behind bars.

Halloween, Thanksgiving, and Fun....Oh My!

It is officially cold and that means I am officially behind on my blogging. We had an awesome Halloween, Thanksgiving and the start of the Christmas season. We have been having a great time making memories and enjoying life! Steffan and I are truly enjoying the age of our children. They make us laugh everyday and temper tantrums are happening less and less. Here is a quick update with pictures on what we have been up to.
Mya and Peyton had to dress as Batman and Batgirl, so I made Steffan get in on the action as the Joker (of course he scared all of the children, so eventually he had to take the mask off!), I dressed as Catwoman. It was an incredible 31st Birthday! 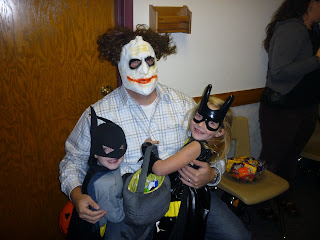 We spent Thanksgiving in New Mexico with Steffan's family and had such a blast. Mya and Peyton had so much fun with Gavin and Hailey and Grandma LaLa - of course Missy the dog and Grandma's hot tub were a plus as well. They also enjoyed one of Steffan's favorite past times, playing in the dirt. They did this for hours(Steffan's brother just moved into a new house and they haven't finished the backyard yet). They also enjoyed bowling, the trampoline, jumping castles, and visiting Santa at the mall. :) 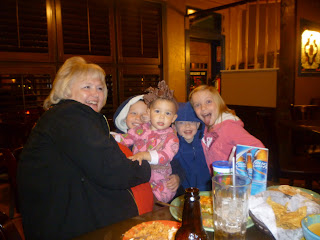 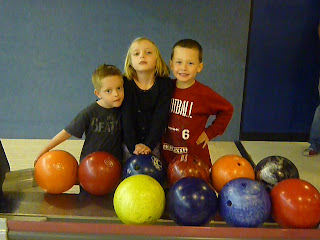 Mya had her first Cheer leading show, and her and her team did a great job! She is the smallest of the bunch so has to be on top of all the lifts and pyramids. Although afraid of heights she does great and looks adorable! 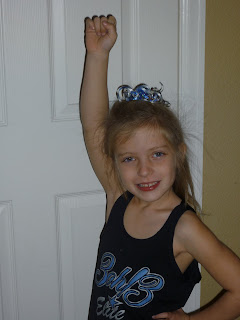 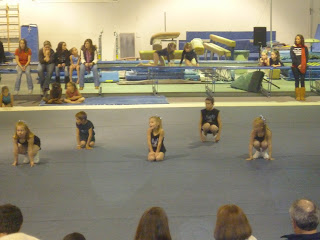 We are so excited for Christmas and have been getting into the spirit by decorating the house inside and out! We also made a visit to the local Retirement center/Nursing home to share some Christmas carols and holiday cheer. The kids were so adorable! You will have to keep your eyes open for Tiffany's or Emily's blog as I didn't get any pictures. I just love the holidays - so many wonderful memories and time with the family!
Posted by Buschfest at 6:48 PM 2 comments:
Older Posts Home
Subscribe to: Posts (Atom)